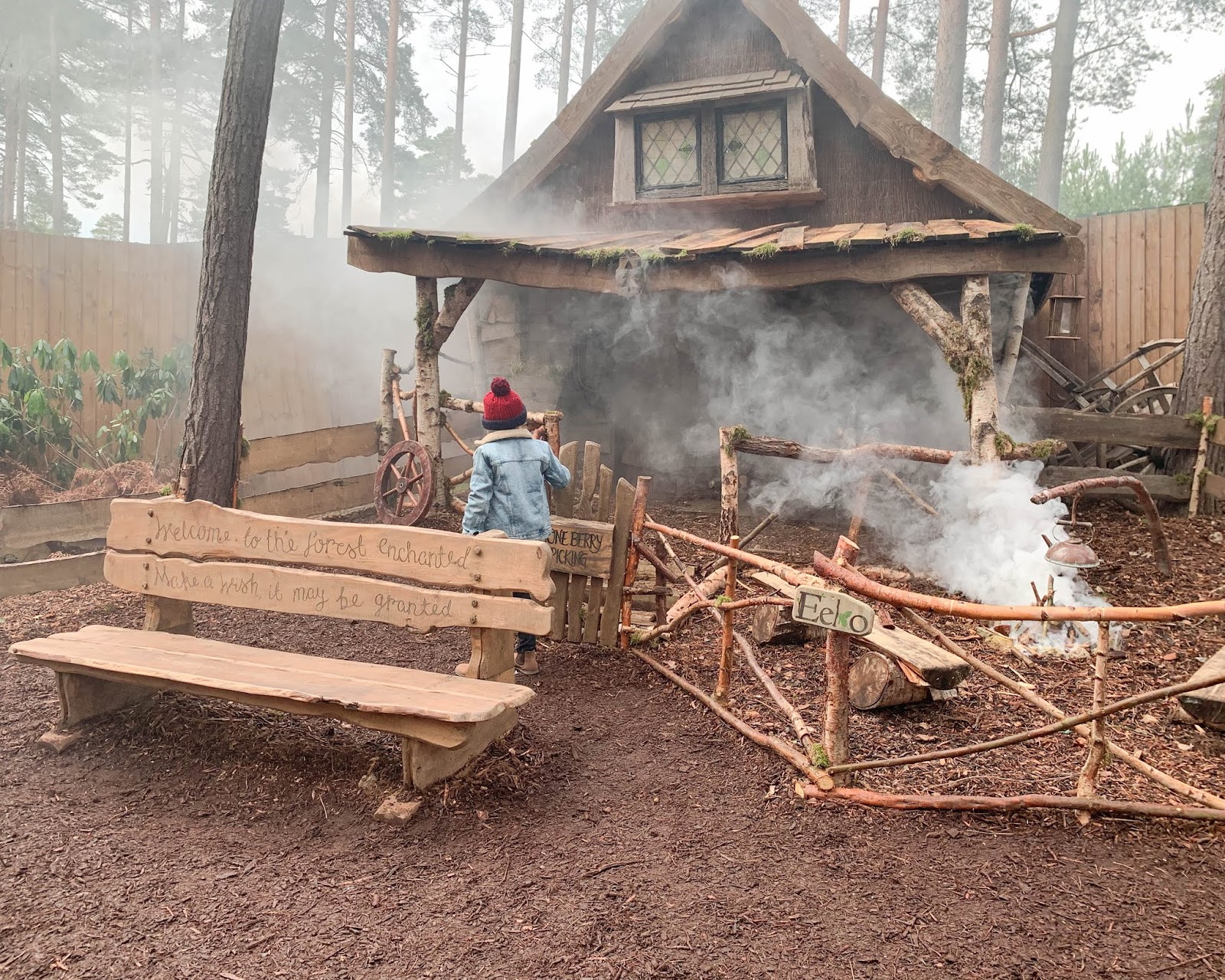 It’s no secret that Kaiden is getting older but the secret and magic of Christmas is still tightly sealed. Although I’m not sure how long for as the curious mind and questions have already started. I’m not going to lie I am nowhere near even thinking about Kaiden growing up, the only way I can describe it is like the distance between chalk and cheese. I’m just nowhere near ready. But in such a short space of time, I tried to pull a showstopper together with the help of Lapland UK to keep that magic alive a little longer.

In the days leading up to our arrival, Kaiden started saying that Father Christmas wasn’t real and it just broke my heart. So I left the announcement that he was going to see the big man until the night before, long enough for him to get excited but not too long where he would ask a million questions that I didn’t know the answers to or just couldn’t remember the answer that I gave last year (bad mum point there but aye, I’m winging it too). Kaiden walked through the door from school to find that Buddy, our naughty elf that stays with us throughout December, had left a big ol’ mess with a beautiful letter from Father Christmas himself in the middle of faux snow. I cannot tell you how excited Kaiden was. 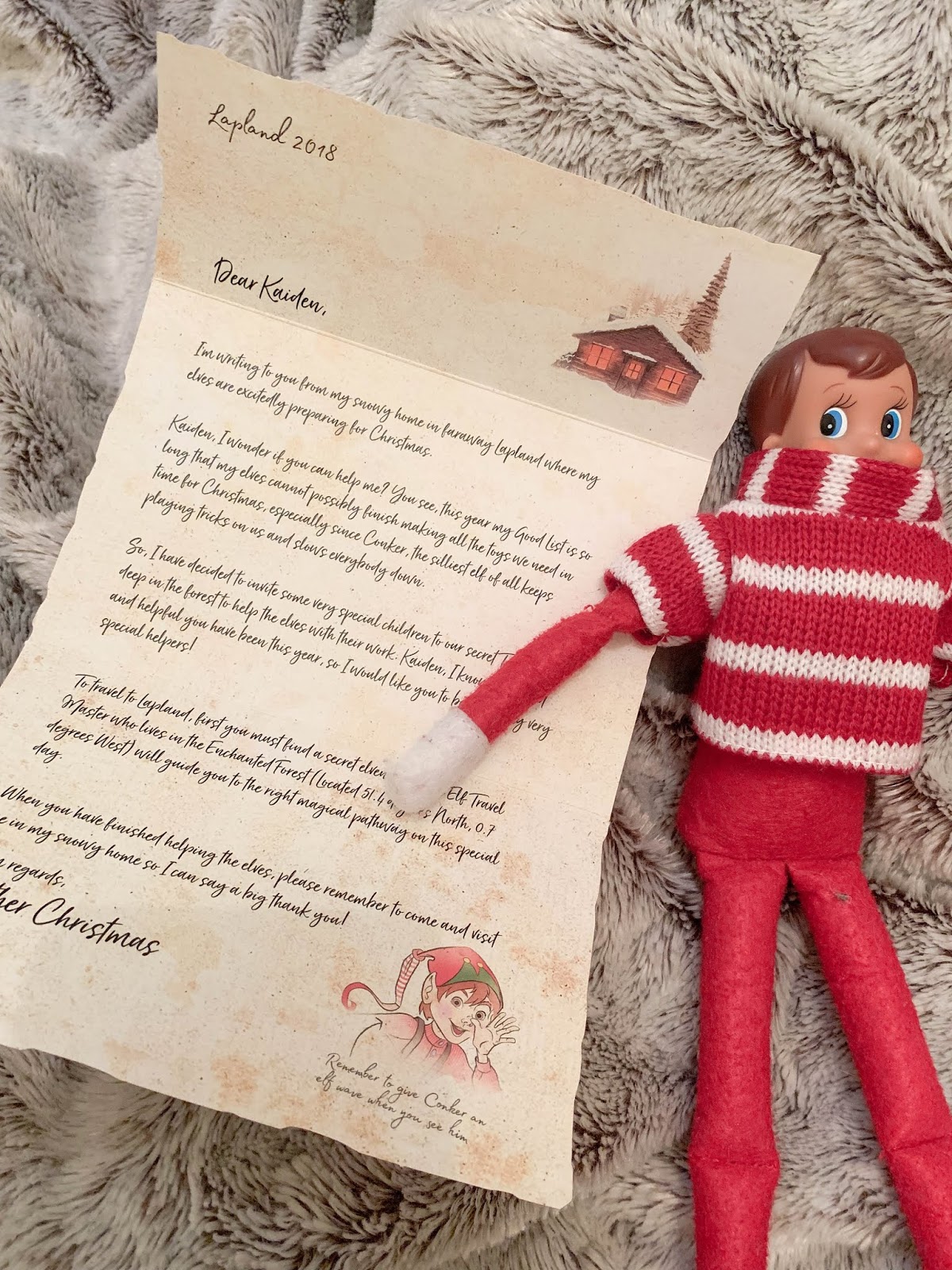 Snow covered trees, twinkling lights, elves and silly fun – there is no denying that Lapland UK is beyond magical. From the moment that we stepped out of the car and headed towards the Enchanted Forest, it was spell binding.

When we arrived at the check-in lodge, decked with fairy lights and suitcases with a grand clock in the centre, we were greeted by an elf who quickly checked us in but took her time speaking with Kaiden. It was a really special touch. She handed Kaiden an Elf Passport granting him access down the Elven Pathways, a small velvet pouch containing Jingles; the Elf currency and a newspaper where the main storyline was Father Christmas had invited small folk to Lapland to help make some toys as there were so many children on the good list. The attention to detail was just something else. 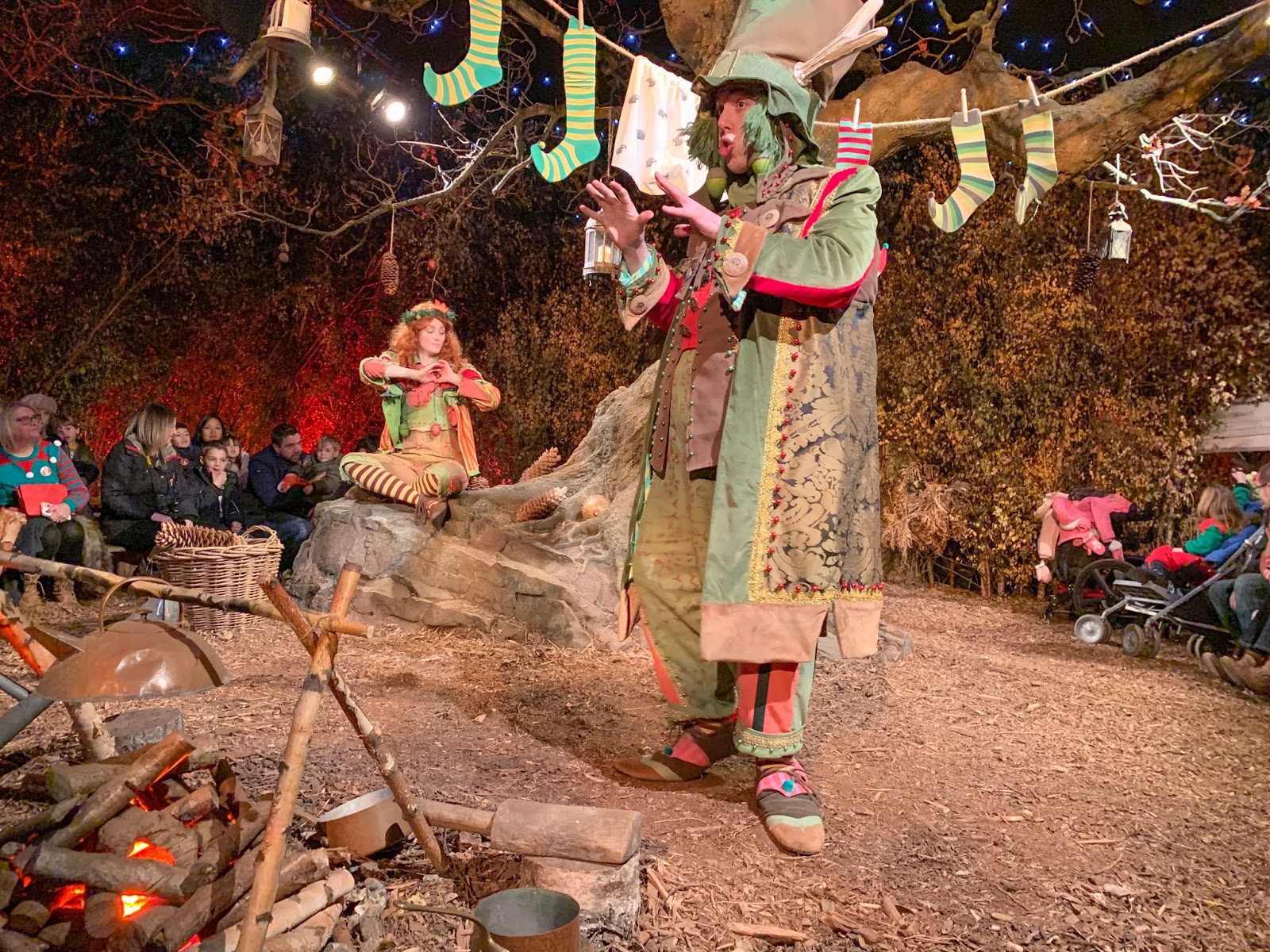 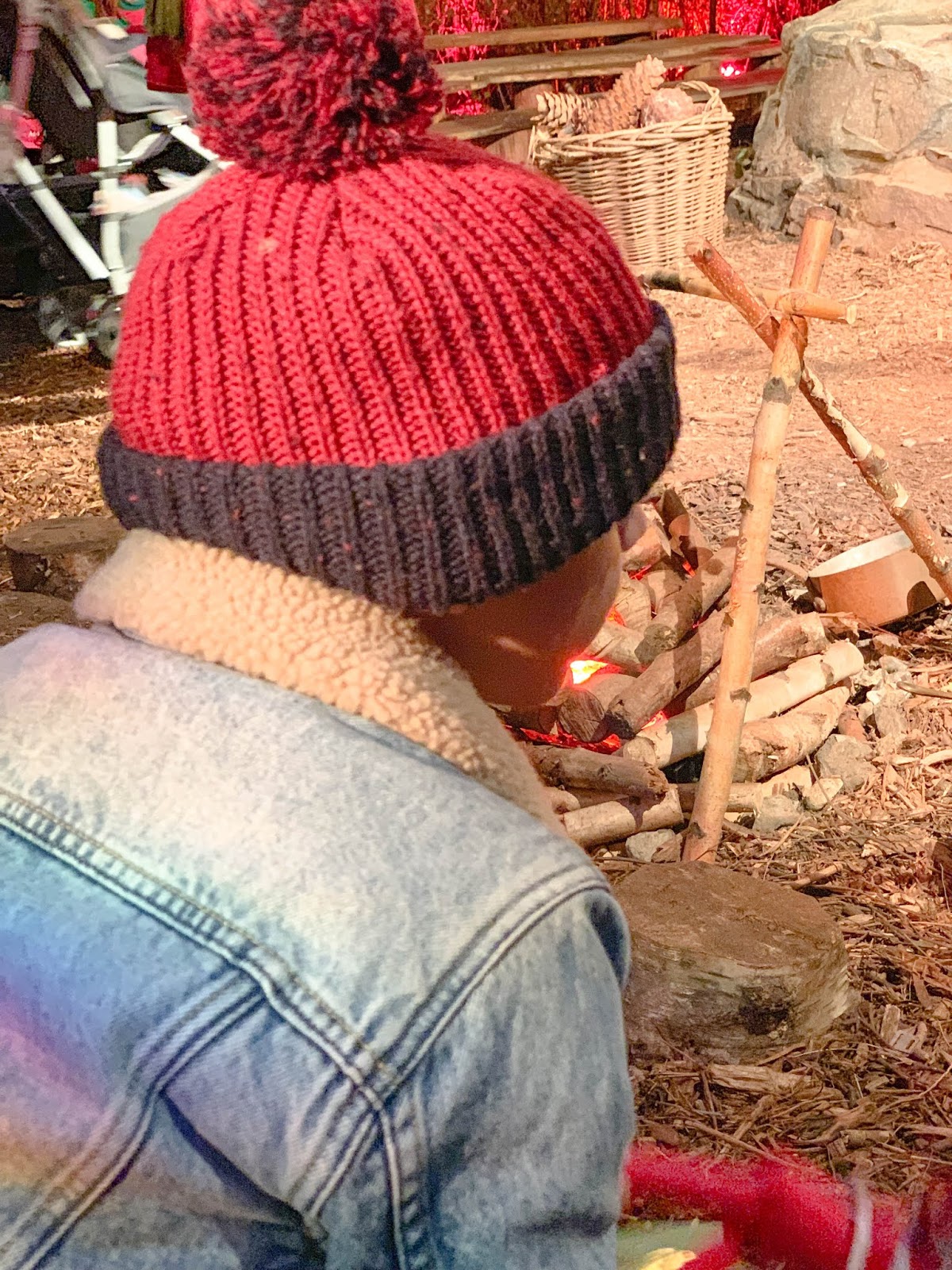 We started our journey meeting Sage and Ecko, who told us the story of how Father Christmas arrived in Lapland. They taught all the kiddies some elf jingles and rhymes. It was such an interactive experience and Kaiden was completely mesmerised with their performance.

The elves then opened the doors to a magical winter wonderland with big ‘gasps and awwwwh’ in sync. There was trees covered in snow, hanging lanterns and an ice cold fresh breeze. We headed off down a snowy path, through a forest, until we reached a lodge – Santa’s Toy Factory. Kaiden entered through a door especially for small folk (cute touch!) 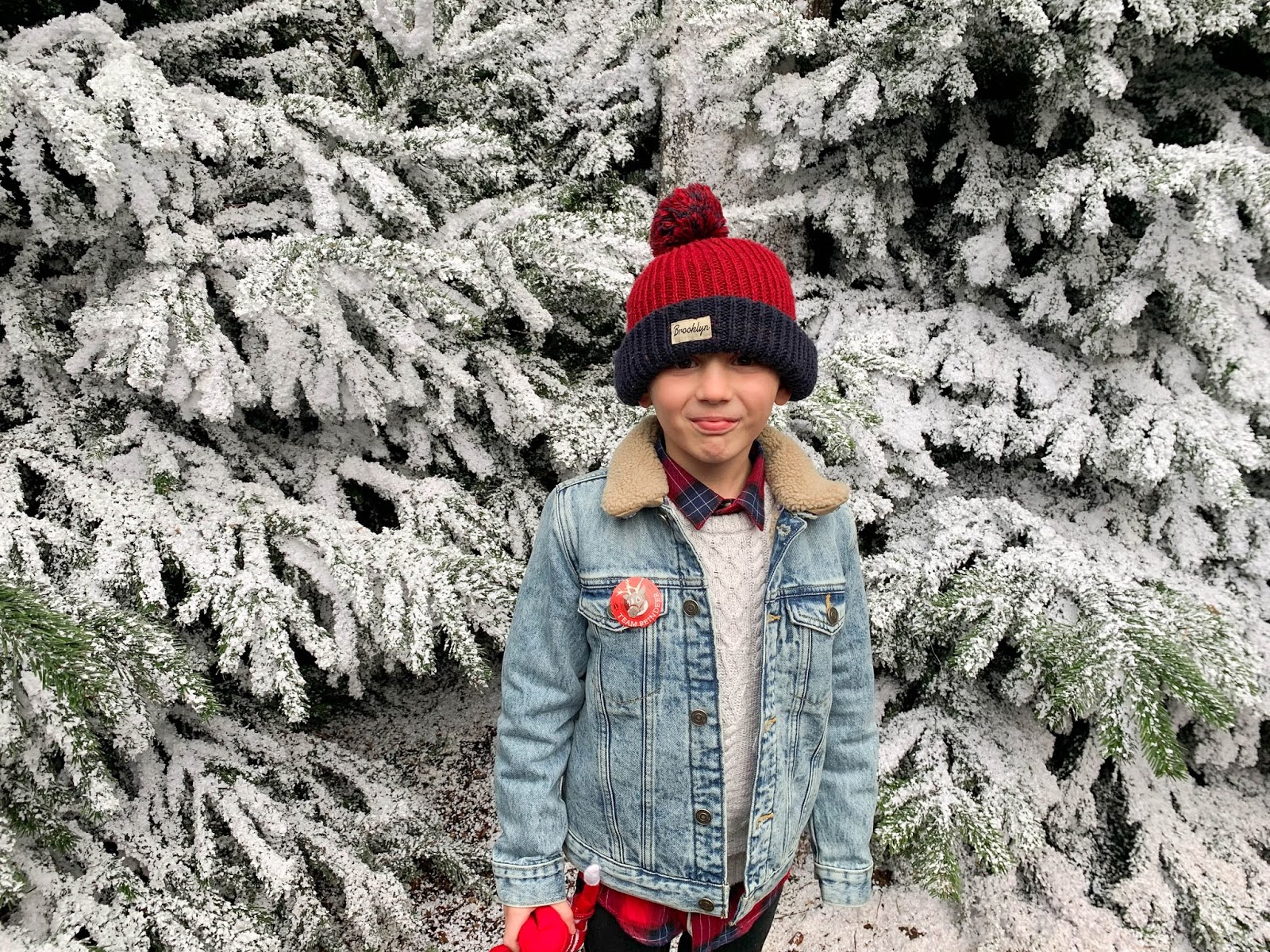 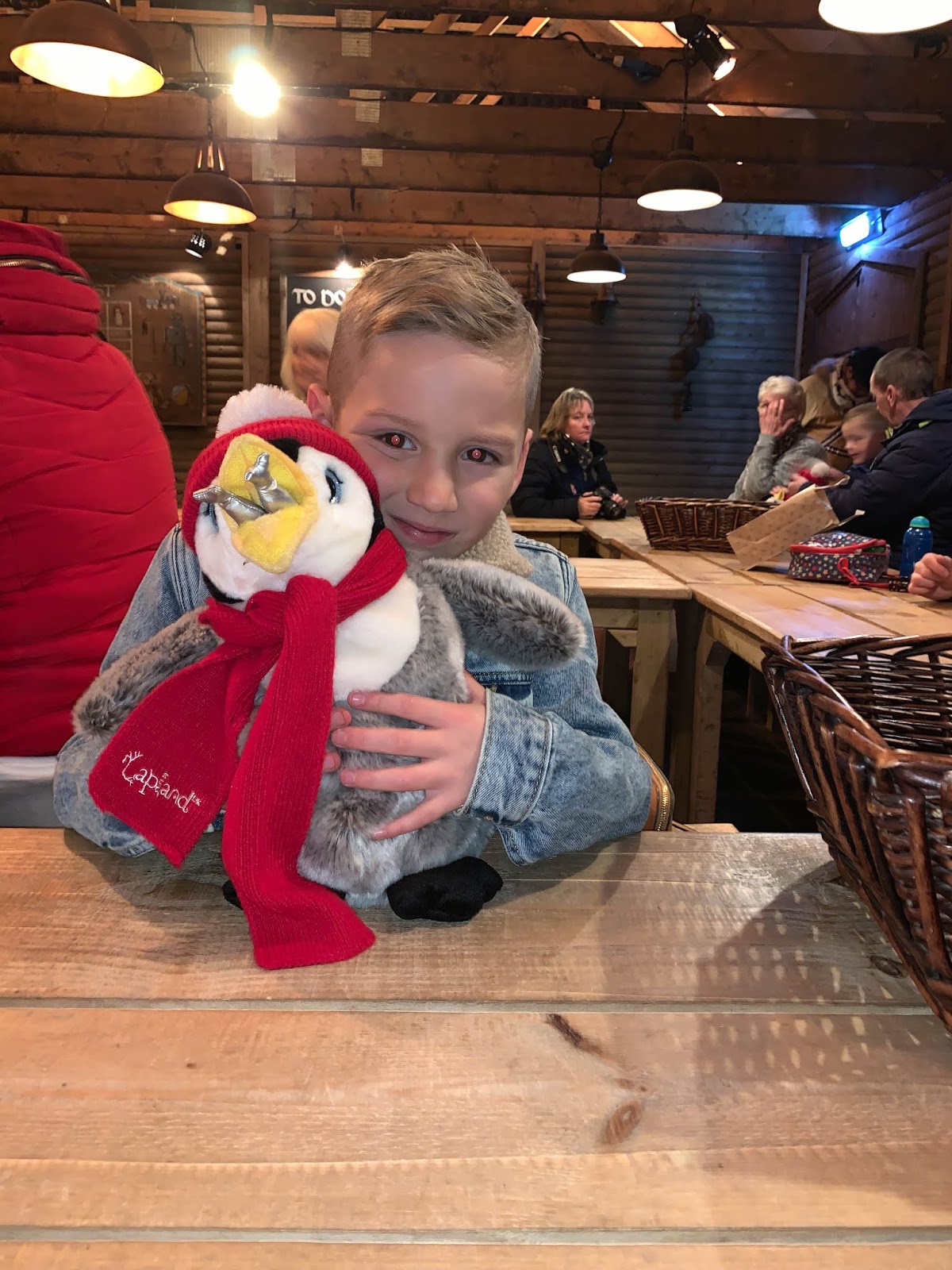 Inside, the children were greeted by three elves; Whittle, Conker (the silliest elf in Lapland) and Wish. Conker showed everyone just how silly he was and the children loved it but he was the only elf in Lapland to not receive his golden bell at the end of his hat. Whittle then received a phone call from Father Christmas explaining that the elves needed to work extra hard as they were behind on toys, you would be surprised how many children volunteered to help the elves out. They were each given a basket where they had to make a cuddly penguin. Kaiden got to work adding the stuffing and sprinkling some special dust to ensure that the penguin was loved, he then popped the hat and scarf on and lastly added some sparkly fish inside Flip’s beak. 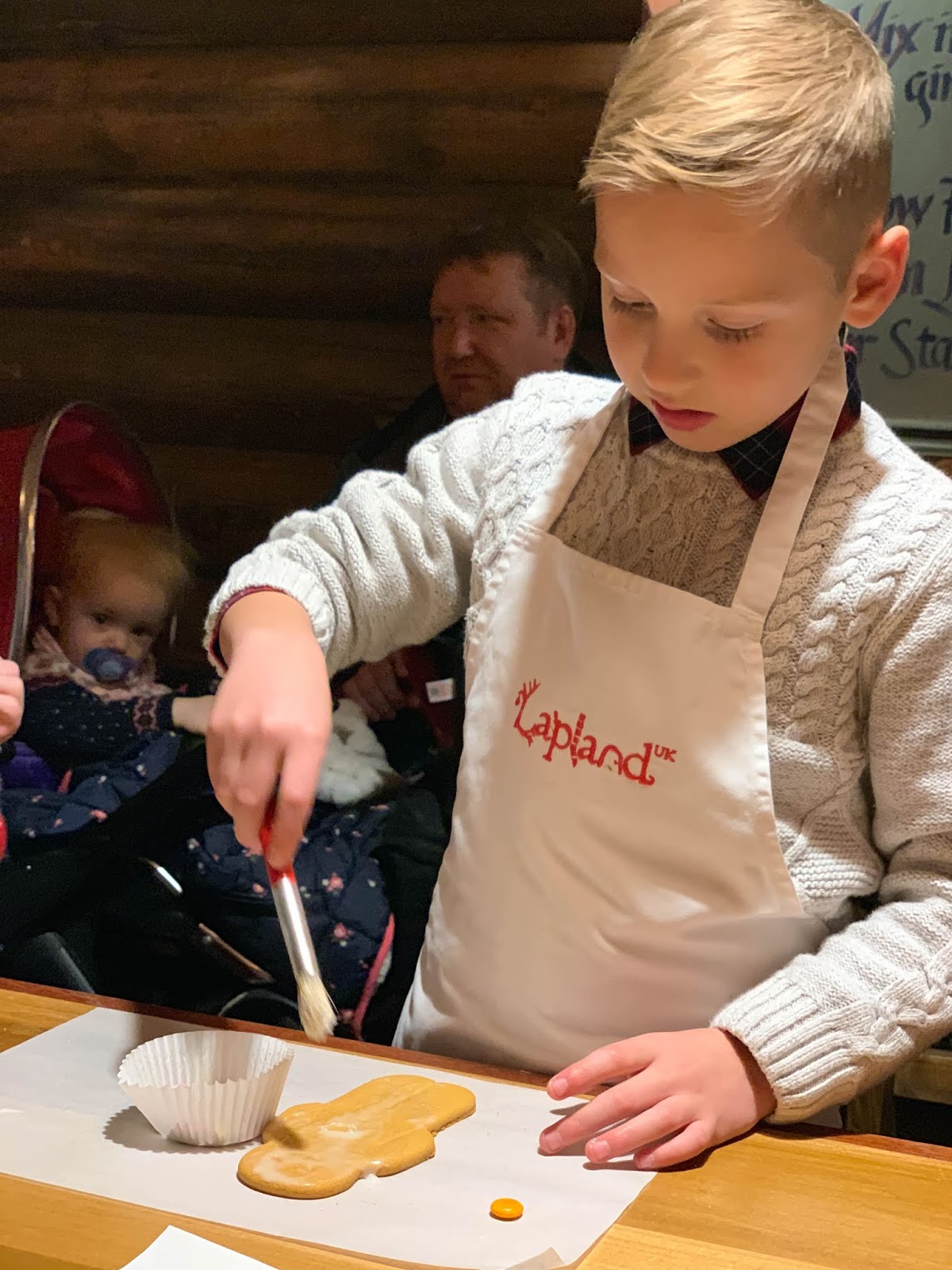 We then carried on our journey through the snowy forest until we reached Mother Christmas kitchen. I’m not sure some of the poems on the walls were appropriate however Kaiden seemed to enjoy himself and didn’t batter an eyelid. He started by decorating a gingerbread man with icing and a variety of sweets before sitting down on the wooden benches to hear Mother Christmas read a story, which was a story about Conker’s journey in attempting to earn his golden bell and how the children can earn their bell by showing how kind and loving they are. All of the adults were given some festive treats while the kids were too busy listening to Mother’s Christmas calming voice. 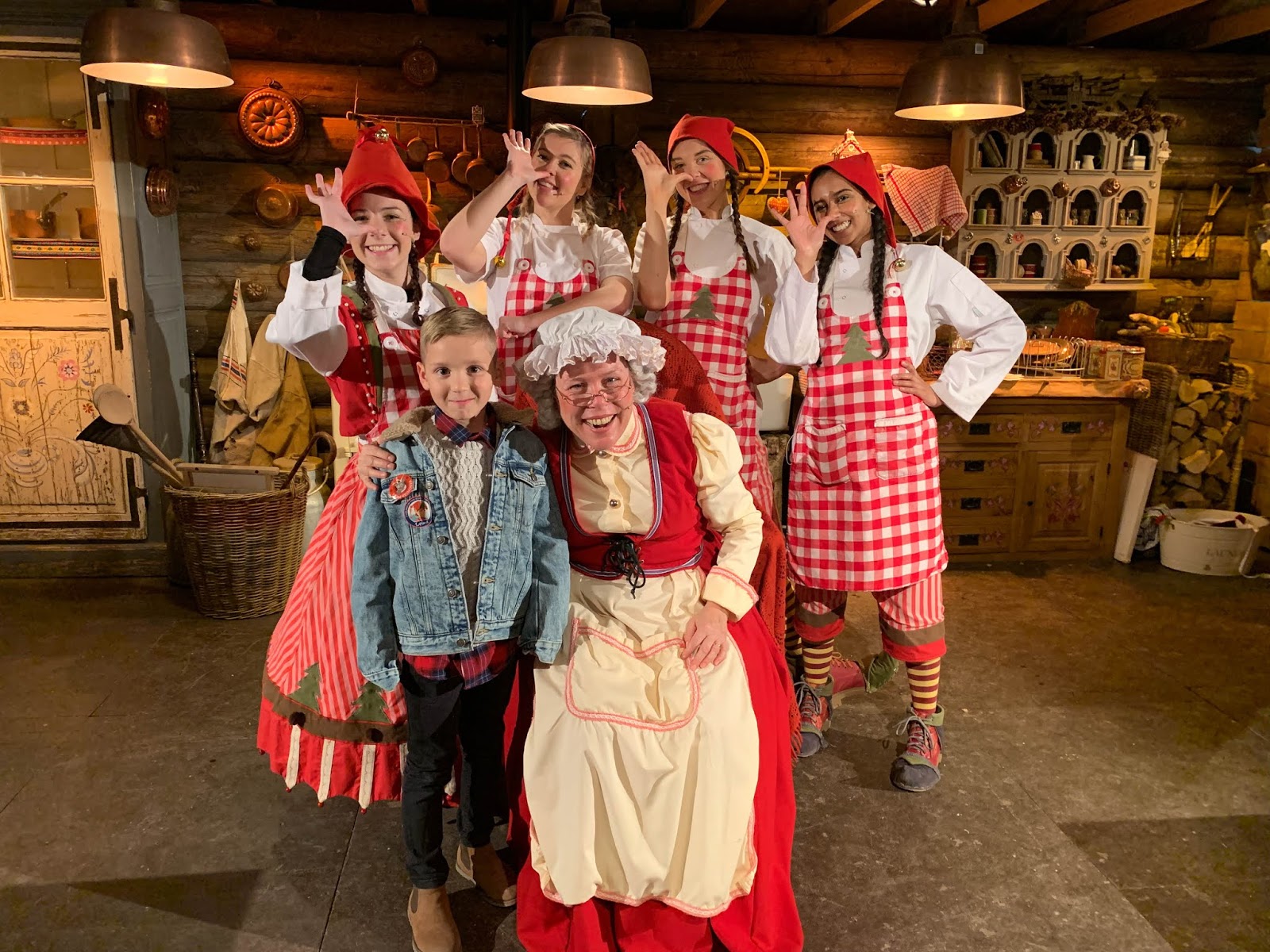 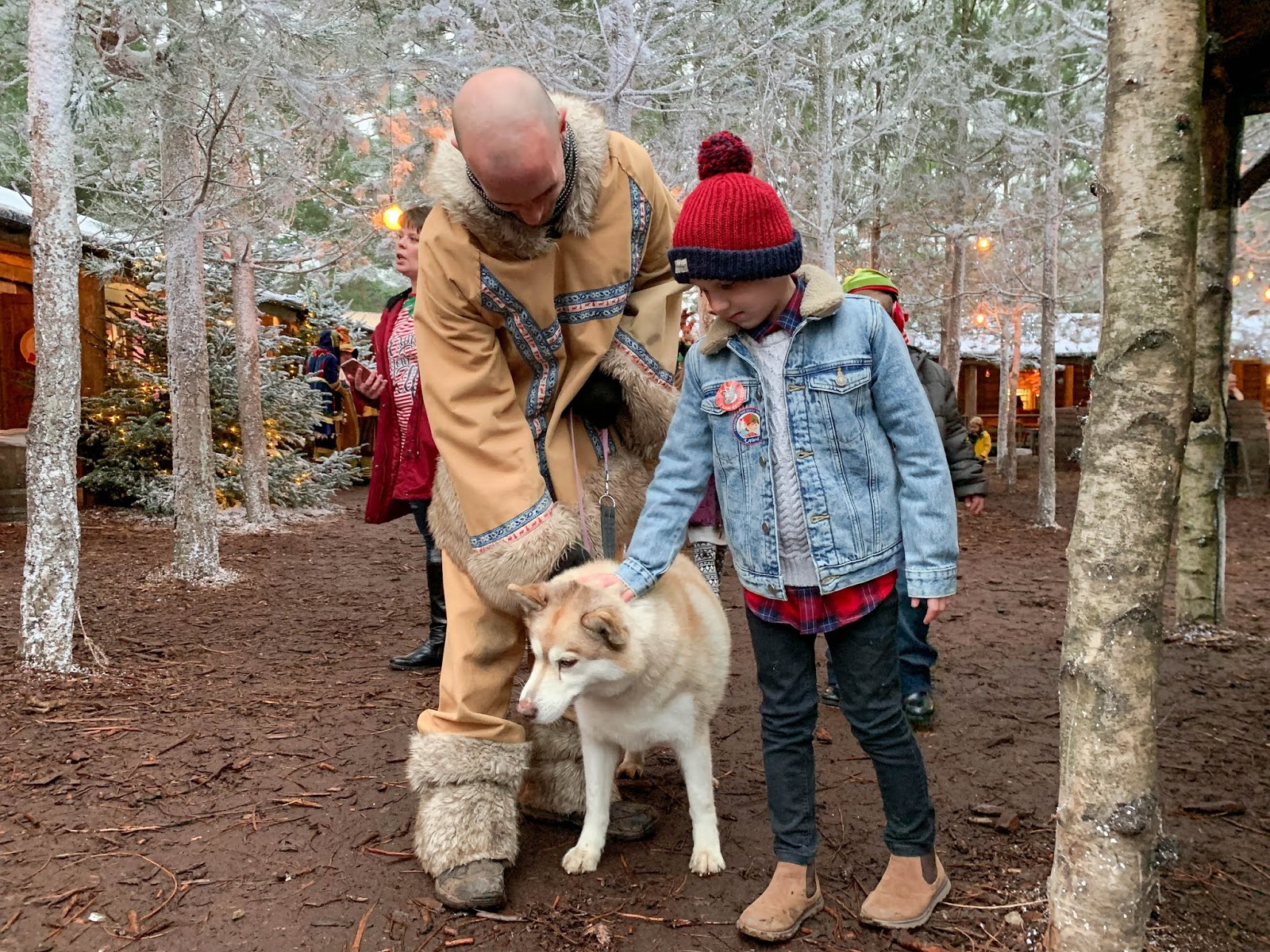 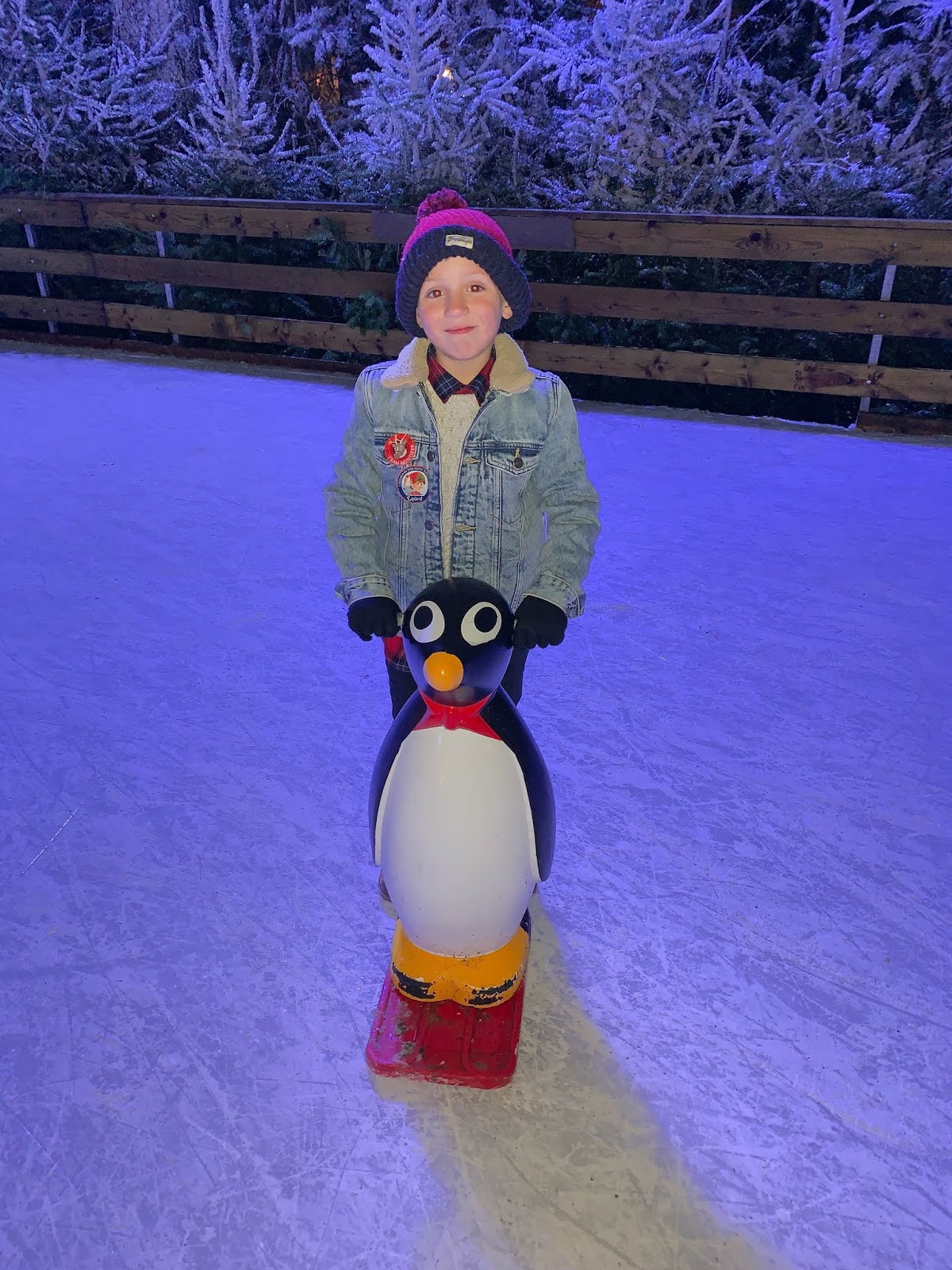 We were then allowed to explore the Elven Village for 90 minutes. I’m not going to lie, I was in awe as I walked through the village. There were little wooden huts that was beautifully lit inside giving that real cosy feeling, the trees were hung with fairy lights that winkled and glistened and right in the middle was an ink rink. We began by seeing the huskies which I wanted to cuddle all day then Kaiden wanted to go ice skating, he hasn’t been before and to my surprise he was actually pretty good and only fell over once when he let go of the trusty penguin. They had slip on skates for younger children or they were also allowed on with their own shoes. We were having such fun that we didn’t realise that it had now became dark and we though it was about time to explore the rest of the village. I must add that I’m glad that we spent most of our time on the ice as I’m sure that there isn’t enough activities within the village to spend your time on without draining your bank balance, especially with younger children. There is the Bauble Shop, Pixie Mixie’s Sweet Shop, The Elf Emporium, stalls serving hot chocolates and German sausages and then a restaurant. 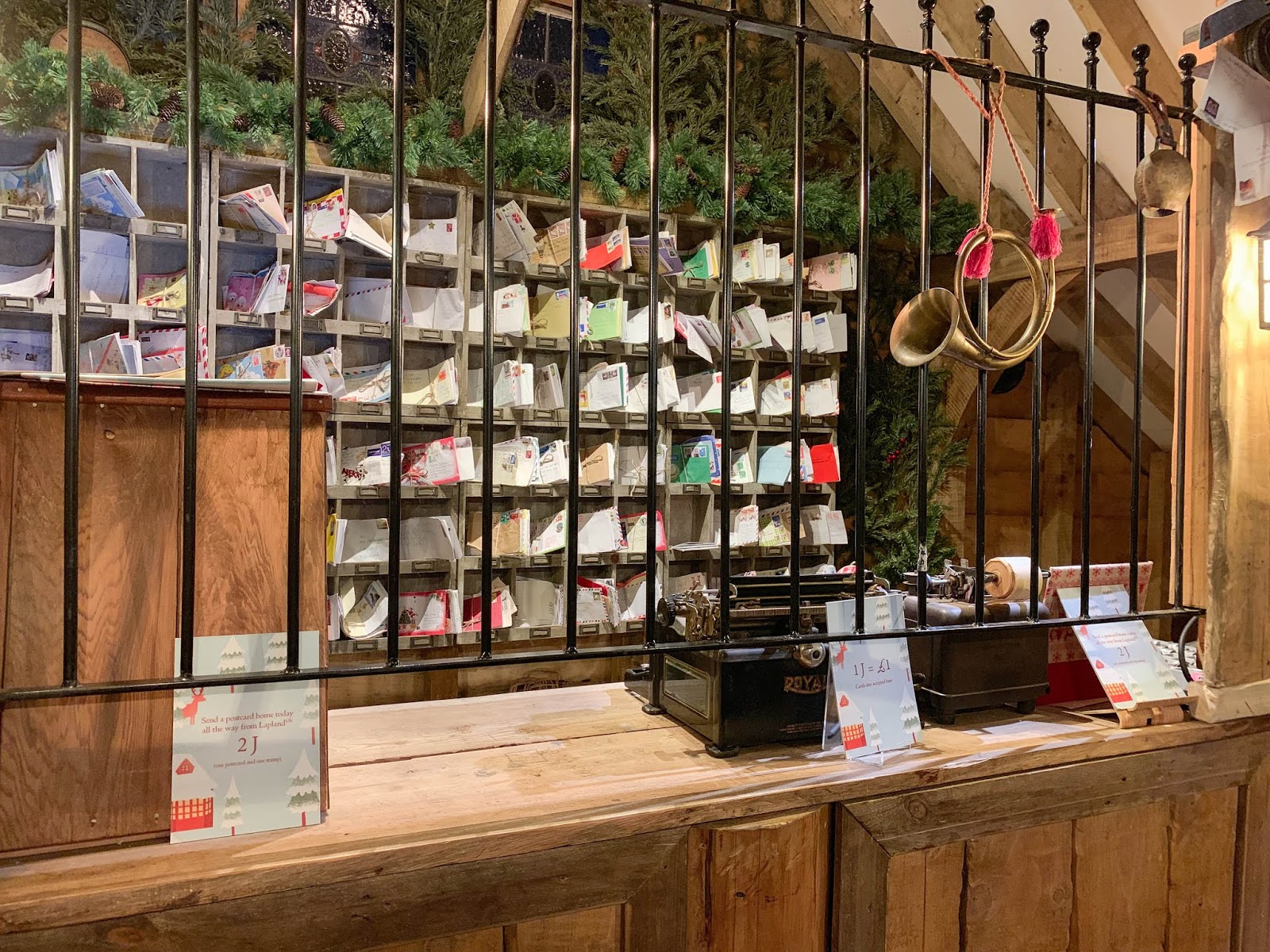 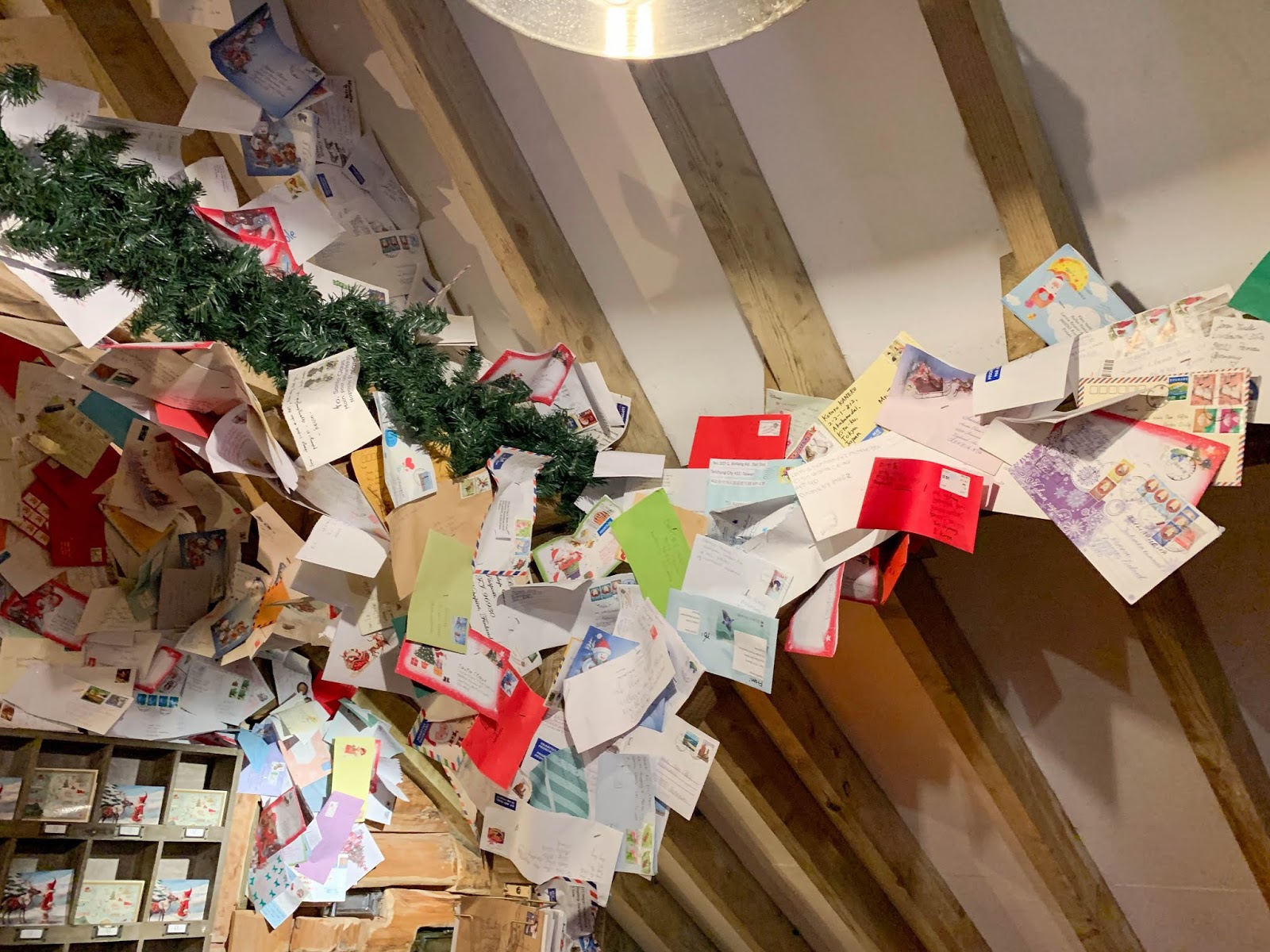 Last not but least, we visited the Post office. It was decorated beautifully with hand written letters from all over the globe – this only added to Kaiden’s belief that he was real and that this is his home in the UK. If I’m honest, I wasn’t entirely sure why we were writing a letter and posting it to Father Christmas when we were going to see him next but we continued, I guess it got Kaiden thinking about the things that he was hoping for on Christmas Day. 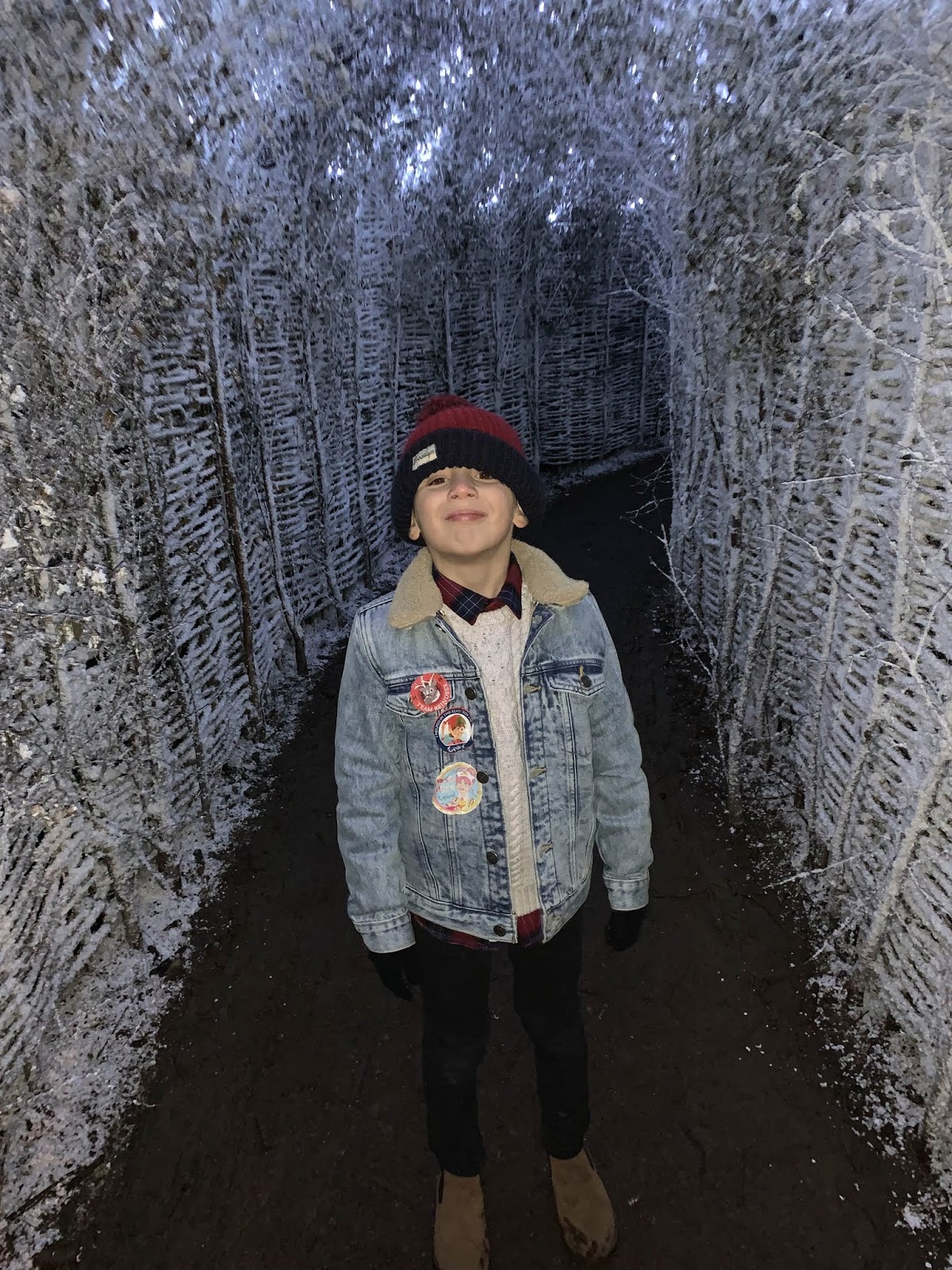 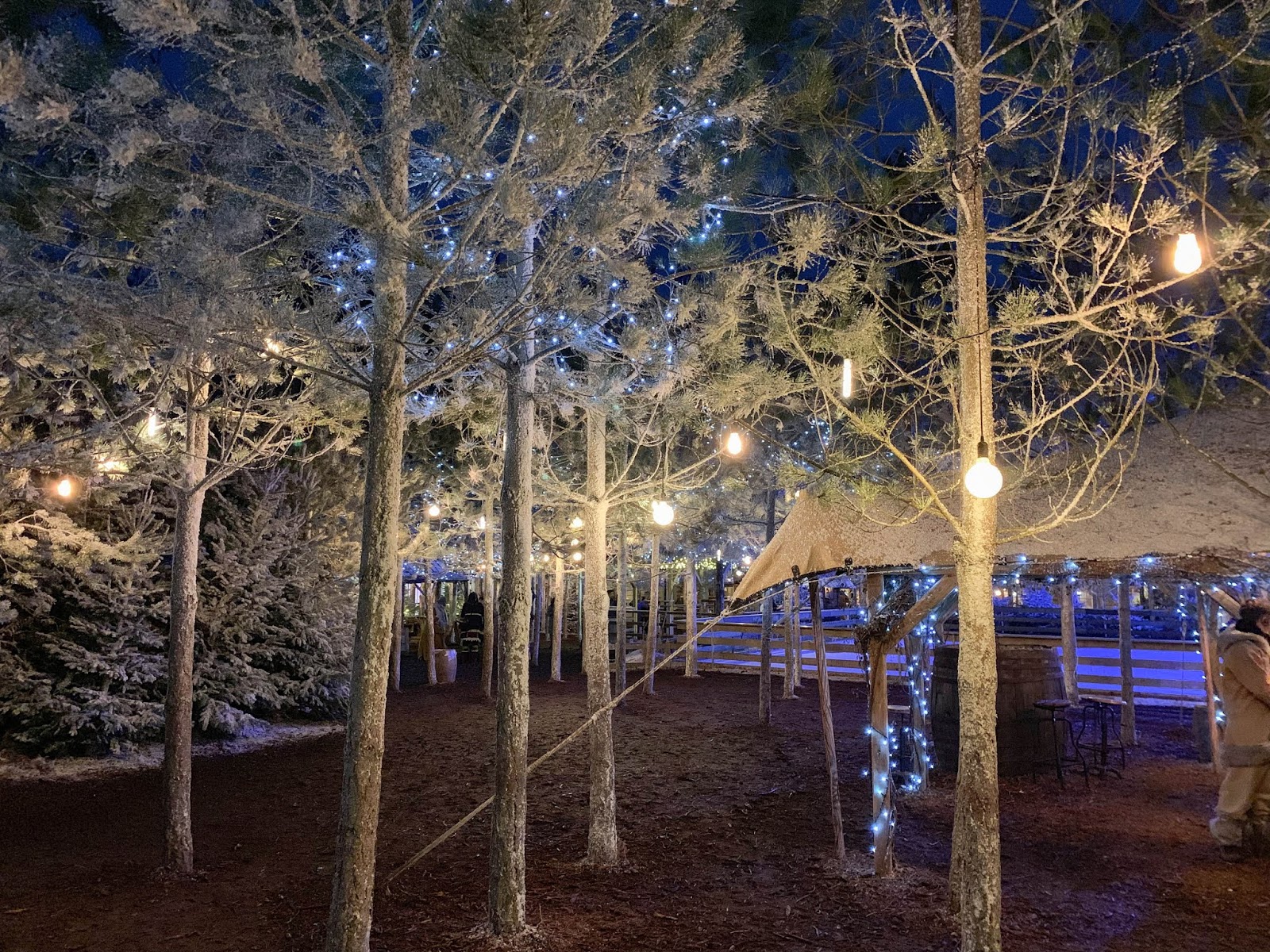 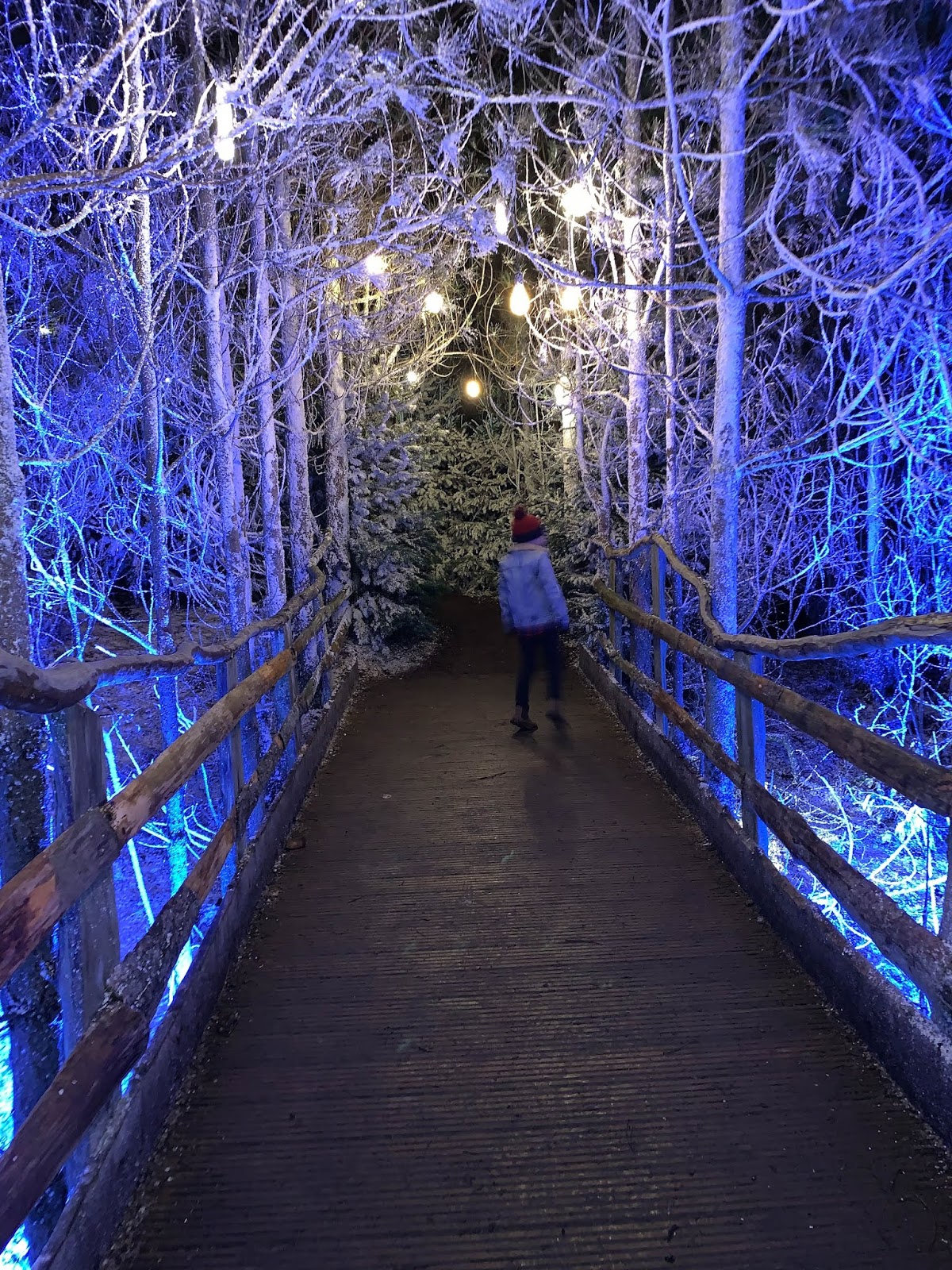 We were given a time on the back on Kaiden’s elf    passport when we were allowed down a special        pathway. We walked for around five minutes     through the depths of the forest that was lit up just   like a magical winter wonderland, passing houses   that belonged to the elves that we had met   throughout the day. When all of a sudden we turned a corner and there were all of Santa’s seven   reindeers. Their collars and reins hanging up outside each of their homes. This was the moment that completely changed it for Kaiden, he no longer had any doubts and I could see that little winkle in his eye. It was very magical. 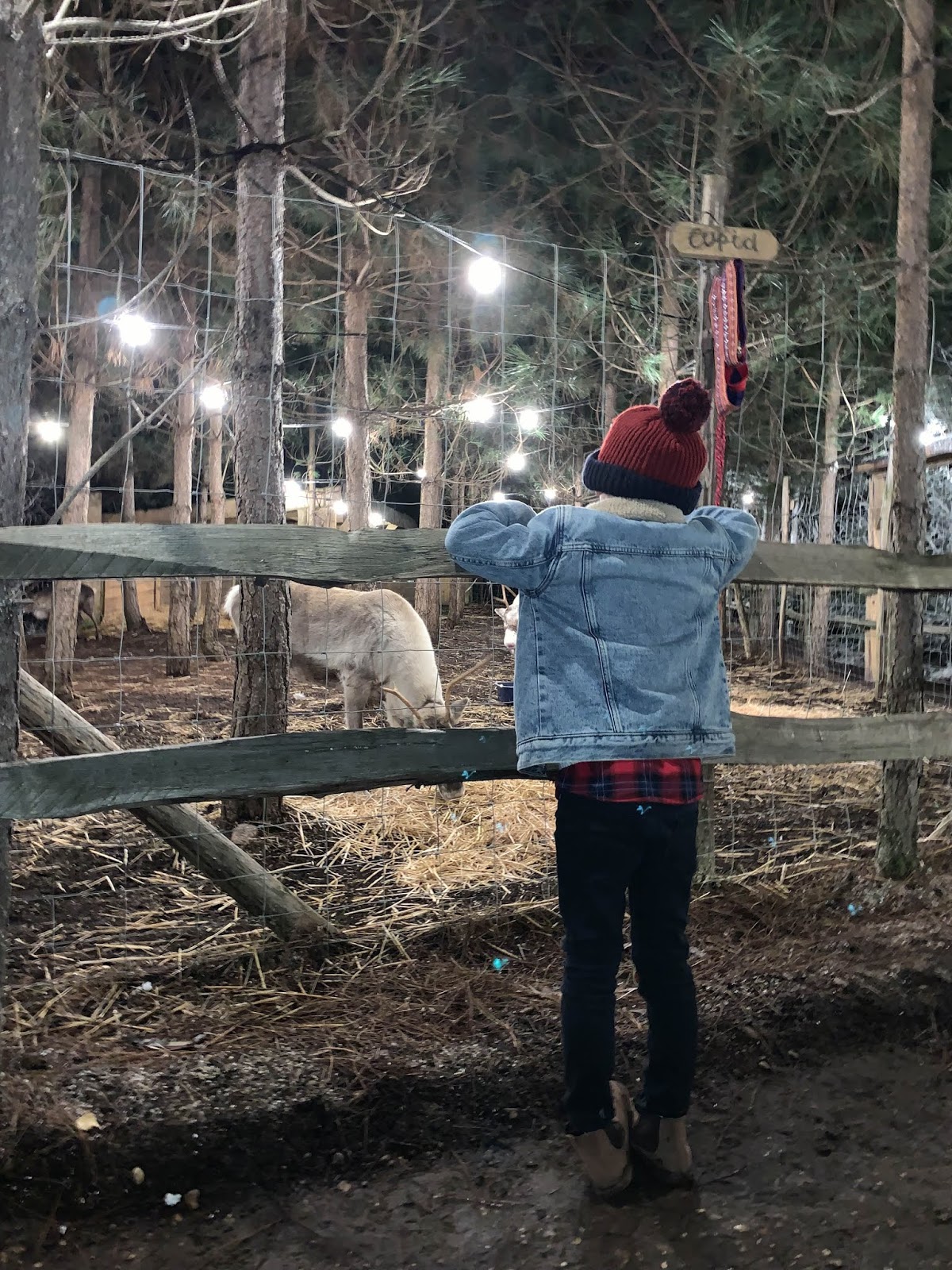 Afterwards we entered through another log cabin where it was optional to make reindeer food for Christmas Eve at the cost of 4Jingles. The food is made up of three different kinds of oats and seeds and then sprinkled with magic flying dust. The elf then teached Kaiden a song for that last special touch before tying the bag with a big red bow. Within the cabin, is also where Santa’s sleigh is stored until the big night itself which Kaiden was just amazed to see.

We were showed through into the preparation room which was decorated with globes and maps of Santa’s routes where you were able to personalise your experience so my big top tip is to send the children to sit down or have a look around to ensure that no ears are around to listen. I think the more detail you give in the preparation room, the better your experience with Santa himself, so don’t hold back. 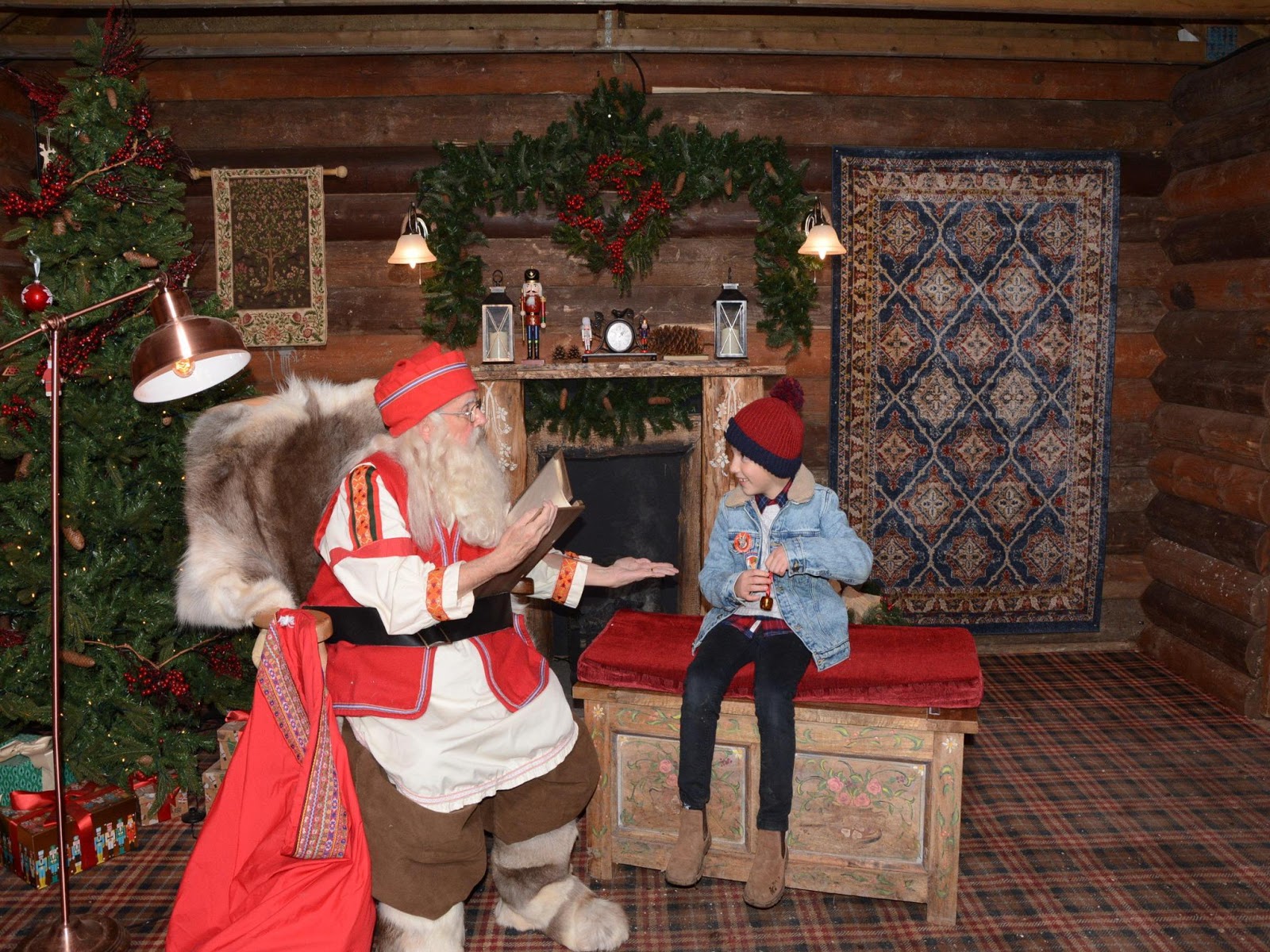 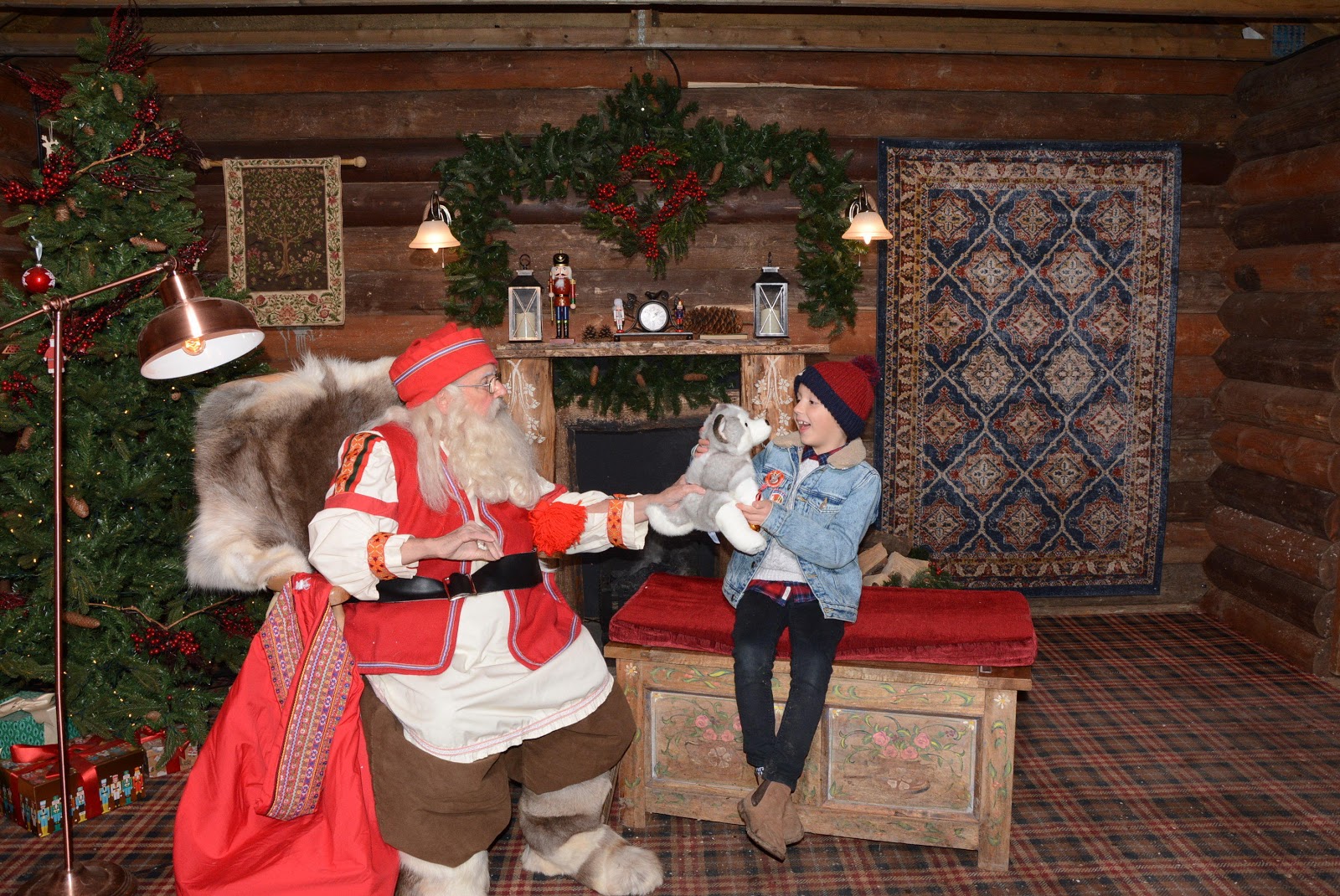 Let me tell you that his Santa was bloody brilliant, he deserves a medal! He spoke with Kaiden for over 10 minutes, speaking about football and his recent goals, he even told of a time that he was in a football team Lapland United. He cracked some jokes and made it a really light heart and fun experience. Santa gave Kaiden his own golden bell for his hard work and kind heart that he had seen throughout the day before showing Kaiden his good list book. I was slightly nervous, considering that his name is not the most common and therefore leaving me with a million questions to answer on the way home. But Santa pulled it out of the bag and showed Kaiden his name in the book with the correct spelling!! One happy boy and one very happy mumma. I was also pleased that the photographer captured some candid photos as well as some posed ones as it really captures the feeling within that moment. Santa then handed Kaiden an early Christmas present, a cuddly toy of a husky which has taken pride and joy in the centre of Kaiden’s bed.

All in all, I was so happy that a) I had trusted myself and continued the booking considering the price of each ticket started from £65 depending on the date and time of your visit (it gets more expensive the closer you get to Christmas Eve) b) it restored all of Kaiden’s belief in Father Christmas and the joy that he creates and c) the magical memories that we made and we never forget. There is no doubt that this experience is literally magically from the very first second. It’s everything that you want your child to believe in and encourage that Christmas magic as long as much.

So, is Lapland UK worth the money? Lucky, I only have the one child however that is not the case for many families. The tickets cost £149 (£75 each plus £4.50 booking fee per ticket). Parking is free and all activities are included – the toy making, biscuit decorating, story time, ice skating, writing a letter to Father Christmas, seeing him, a gift and one photo per family. While we were there, we spent £18 on food, £20 on additional photos, £30 in the gift shop at the end and £11 in the sweet shop; bring our grand total to £228.

Part of me thinks that it’s absolutely crazy to spend that on a trip to see Santa, however I also think that no other trip to Santa would of restored Kaiden’s belief like this experience did. I also believe that you pay for the experience just like a theatre trip. There wasn’t a corner that wasn’t filled with detail. However, we were there for four and a half hours – if it had been a full day experience with perhaps a fairground and unlimited time to explore the Elf Village with more activities, then I might have felt it was worth the cost. For me, it wasn’t value for money however for the experience that not only I had but Kaiden as well, I would consider it to be worthy of the price tag.

So if you’re the kind of person who is happy to splash out, from time to time, on an activity which is utterly special then do it. GO. There is no doubt that you will LOVE Lapland UK.

But I think it’s shame that it’s as expensive as it is – even if they charged top whack for the children’s ticket and a fraction of the price for the adult then it would be much more affordable to so many more families.