My New Years resolution was to carry out a selfless act and to give something back. Now I know what you’re thinking, resolutions are usually thrown out of the window by the end of January and just forgotten about but I was determined to see it all of the way through.

When I think about ‘giving something back’ my mind thinks of charities but I already donate to charity by giving clothes or toys and by popping some change in the buckets as I pass but I wanted to do something more than that, I just couldn’t think what. Until I was in a conversation about organ and blood transfusions and whether if Kaiden or I needed it, would I accept it? I’m seems a very straightforward question, of course I would without a second thought. I would do anything to protect or help him in anyway. Then I thought, how selfish is that? I would happily take someone’s donation but have never thought about donating myself.

The light bulb moment hit and I decided that I would donate blood as my new years resolution and the research began. I learnt that over 6,000 blood donations are needed every single day to treat patients in need across England, that’s 2 MILLION a year! 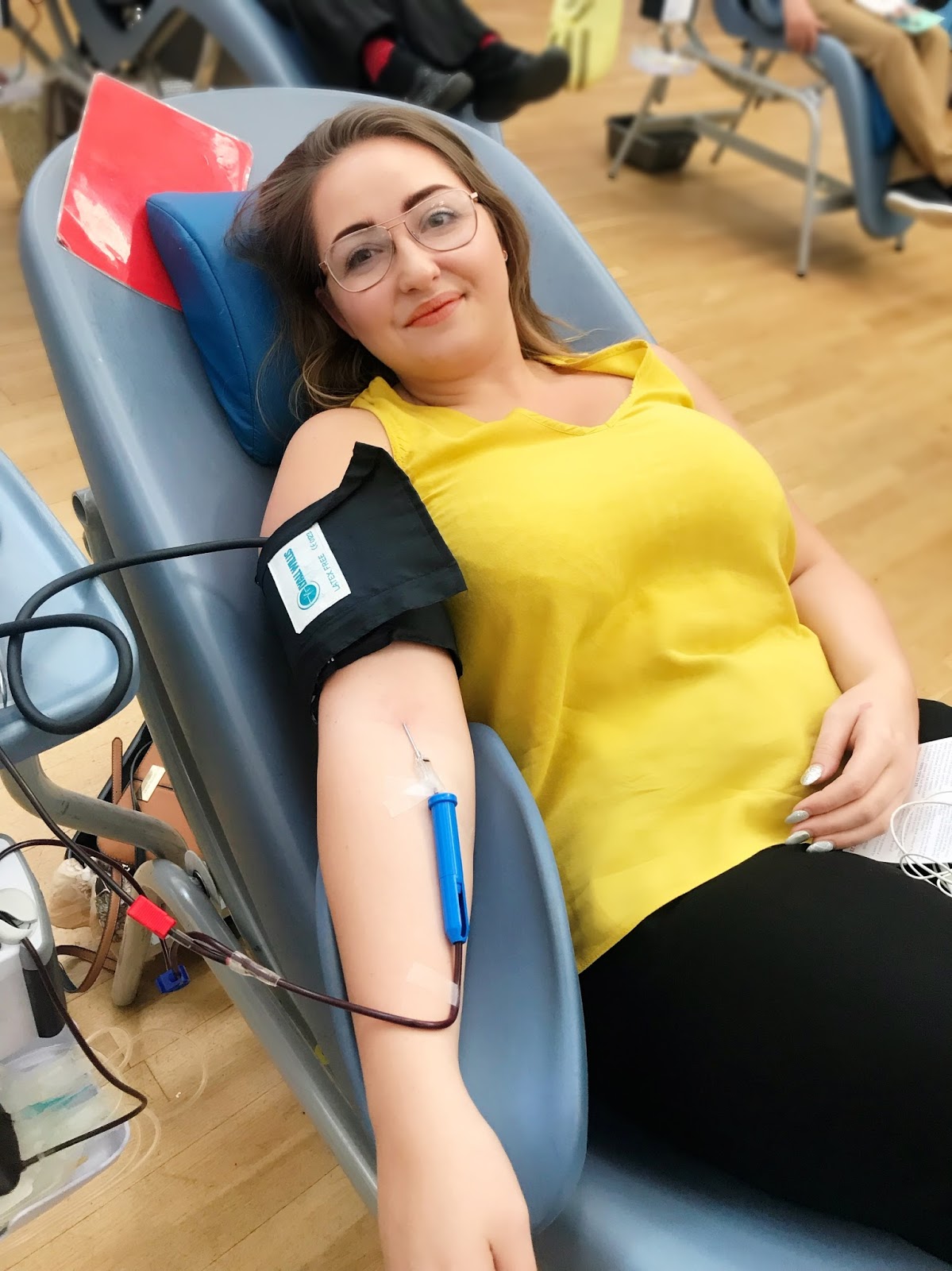 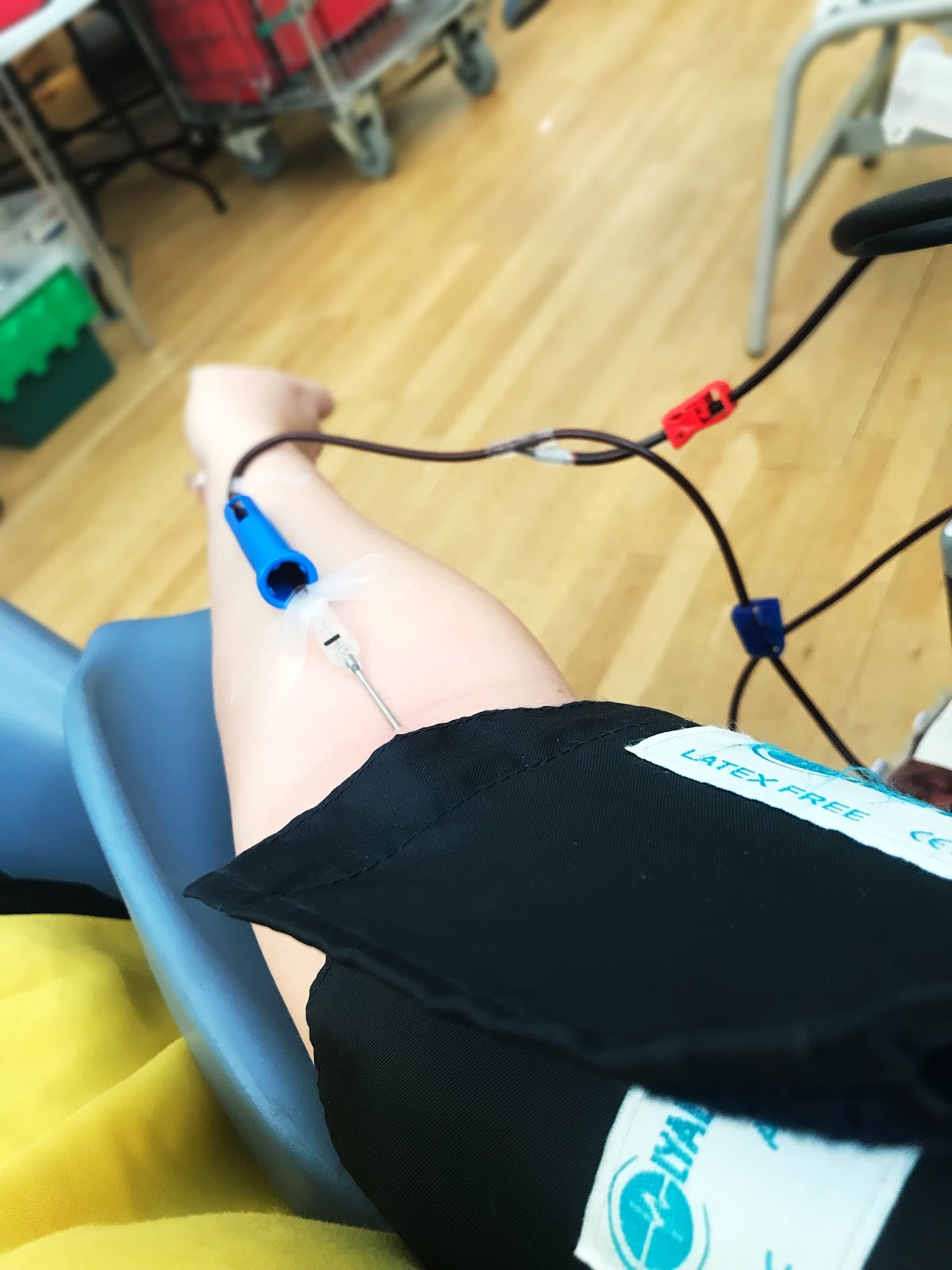 The day of my appointment arrived and I couldn’t help but feel nervous, partly because I didn’t know what to expect but also because my blood could potentially save someone’s life. My appointment was being held at a local church, I walked through the hallways to the sign-in sheet where I was given some material to read along with a large glass of water. I headed to the benches where I sat and admired how many other people were there until it was my turn.

My name was called and I entered the hall. I was first seated in a private cubicle by a young phlebotomist, who pricked my finger, it felt like a sharp snap but not particularly painful and took a speck of blood which was tested for adequate iron levels. She also checked my blood pressure and I answered a few questions regarding my health and travel, all of which is strictly confidential.

I was deemed fit, healthy and eligible to donate. I was instructed to sit back on the reclined chair and relax. A nurse then cleaned my inner arm before neatly inserting the needle. Seven minutes later I have donated a unit on blood, completely priceless and filled me with satisfaction.

A nurse cleaned me up, put a plaster on and after making sure I was feeling okay, walked me over to the refreshment area. I thought ‘what a simple and easy way to impact the lives of others’. I sat down while the nurse informed another nurse that it was my first time donating and she gave me something to eat and a glass of orange squash to help replenish energy. While having a natter with the nurse, I felt this mist come over my head and I began to feel dizzy. Within seconds the nurse was standing behind me supporting me to sit up shouting for a crash mat. She laid me on top of the crash mat placing a block beneath my legs to raise my knees and an ice pack on the back of my neck to help cool me down. The nurse stayed with me the entire time, nothing went wrong with the donation and it was completely successful; it was the adrenaline that left me leaving faint. After a few minutes laying down, I felt absolutely fine. The nurse gave me another drink and a penguin bar to make sure I was feeling 100% before I left.

Even after the little bit of craziness, I didn’t let it phase me and I booked myself to donate blood again in 16 weeks time. From start to finish was around an hour with the actual donating part being only 7 minutes!! The time I taken out was nothing in comparison to saving someone’s life and I look forward to donating again.